This story has been going around Facebook and Twitter all yesterday and I can't quite wrap my head around it.

836 budgies were surrendered in Detroit, Michigan, yikes! You can watch a news clip at this link, which has links to the rescue organizations working together to help the birds and accept donations.

I'm always reluctant to play bird videos because someone else's shrieking birds can cause mine to shriek as well, but I'm really fond of the Parrot Town TV YouTube channel, especially Bird Room Buddies. It features large parrots and two cockatiels and the chill sounds actually don't set my birds off. I played it today after hours of shrieking and it had a last effect. Just when you think you're done with the spring breeding season, along comes the fall breeding season. Yikes!

It seems like Muffin and Will are trying to become friends and so far so good. It's hard to tell, to be honest! Muffin and Will do recognize that they are birds, but they can't figure out the body language at all. I think Will must have tried to feed Muffin because Muffin shrieked and flew away in a panic while I was working at the kitchen table. No one expects surprise barf in their mouth, LOL! Muffin screams and flaps and sometimes whistles at Will (which he used to do with Feisty) and Will bobs and weaves and gets all excited.

I put two comfy perches on the outside of the budgie cage and Muffin uses them to visit with Will. It took a few bits of corn flakes to teach Muffin to go up and down them. They have spent about a month and a half getting to know each other. They preen together and spend time together. When Will calls, Muffin will fly upstairs, so that's hopeful!

I have been trying to teach Will to step up and it's not going so well. At first I was hopeful when he lost his fear of the perch and stepped on it to step over it. Now he is back to just flying all over the place. I tried twist tying millet to the end of the stick, but no luck. Some days there are going to be setbacks :-D 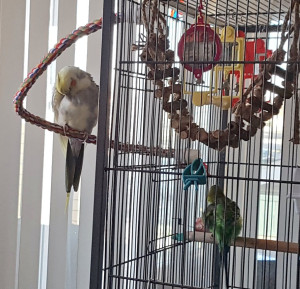 Working from home has it’s charms—good or bad. My birds decided to lose their minds during a tech support call while I was trying to give instructions to someone. I selectively muted to minimize the noise, but my co-worker still told me a hilarious story after Muffin flew away with a big eagle scream.

My co-worker used to work in a call centre as a booking agent and one caller stood out. It was absolute chaos in the background! What was going on? The caller apologized and said she had ten parrots and they were raising havoc as parrots will often do. One was singing Old MacDonald in the background (must have been an African grey or an Amazon!) and another one was yelling “Shut up!” While the other birds were presumably squawking. The caller said she had just arrived home, and as any bird owner can tell you...it’s happy scream time for a good solid hour when the flock is all together. I didn't feel so bad after that :-D

Parrots are all id, I swear! 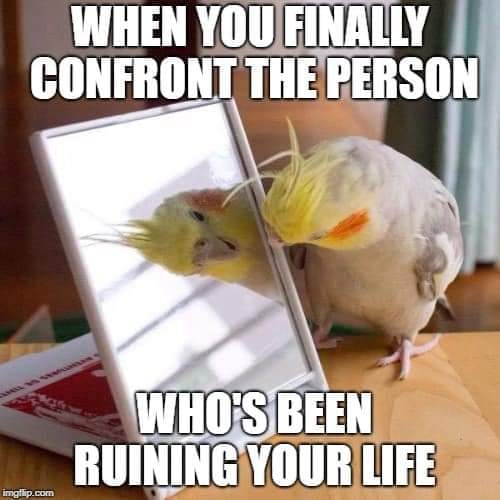 I have several boxes of Bird Talk issues from the 1990s that I am getting ready to declutter because I need the storage space. Thought I would see if anyone still here (all two of you LOL) would like to have any of these, if you're looking for a specific bird or something. They're not mint but not nasty. Magazines would be free but would appreciate postage. Let me know before next weekend when they'll be going to the dumpster.

Also have lots of '90s Reptiles issues if you know anyone who likes herps.

We had a surprise visit last weekend from a friend who brought us a copy of a card game called Trash Pandas, some chocolate and the awesome budgie plushie below. It's Sweetpea from The Secret Life of Pets! I just love it :-) My friends know me so well! 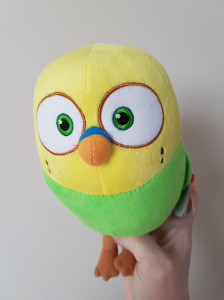 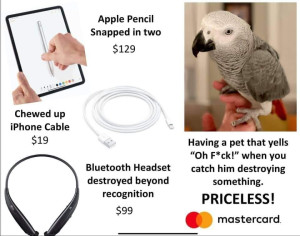 Just posting this as a reminder to myself to read later :-)

OVER THE PAST 14 YEARS, MARTIN GUTH HAS BUILT A MONOPOLY ON SOME OF THE WORLD’S RAREST BIRDS. WILL HIS SECRETIVE ORGANIZATION ULTIMATELY HELP PUT MORE PARROTS IN THE WILD, AS HE SAYS—OR PUSH THEM CLOSER TO EXTINCTION?

I placed a big order with Parrot Trends a few weeks ago and here's some of the fun stuff that arrived. Muffin's old X-shaped perch was chewed up and needed replacing. He got a toenail caught in another perch, so that one went. Muffin doesn't deal with change easily. He also hasn't shown interest in the new toys. I gave the pinata to the budgies and they feel meh about it too. 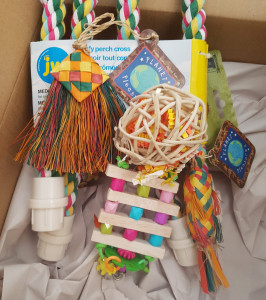 Muffin was not happy when I replaced the perch. It was totally the wrong colour and in his mind, nothing was wrong with the old one! He worked hard to chew it up, darnit! 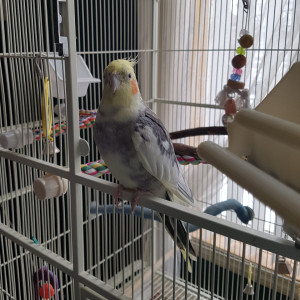